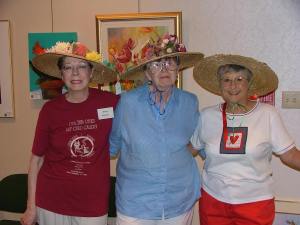 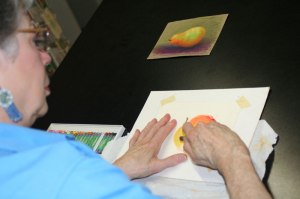 The month of July is The River Gallery’s 25th anniversary. WOW!  That’s a quarter of a century.  The artists/members will feature a memorabilia wall with photos and news stories from the past 25 years . Each artist will show a painting created just for the occasion using “silver” or “25” as the theme of the painting. The “Silver Celebration” exhibit will continue through Thursday, August 6 with a closing celebration during the Downtown Gallery Crawl.

The gallery started in the summer of 1990 with a group of local and regional painters, potters, photographers, woodworkers, and jewelry makers wishing to promote art, art education, and art appreciation to the people of this area. They formed the non-profit co-op named “The Ouachita River Art Guild.” Their first gallery was in the Glenwood Mall in West Monroe, and they later moved to Antique Alley in downtown West Monroe, growing into a much larger store front on Antique Alley at 308 Trenton Street where they are now located.  The River Gallery has now become the oldest art co-op in Louisiana. Each artist takes a turn at working in the gallery, while other details of running a business are spread out among the members. Membership in the gallery is through a juried process.

Workshops that anyone can attend, in various media, by well known artists are sponsored several times a year in different locations. As the co-op approaches its 25th anniversary, it continues to thrive and grow. Located at 308 Trenton St. in West Monroe on historic Antique Alley, it is open to the public free of charge Tuesday through Saturday, 10 AM to 5 PM. Phone 318-322-2380. Web site: 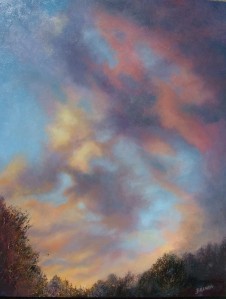 Stormy Weather
Brenda McDaniel’s Featured Artist Show is titled “Looking Up” and consists of large oil paintings of skyscapes. The artist says, “When the world crowds in on me, and I grow weary of dealing with everyday problems, I go outside and look up. It puts everything in proportion and refreshes my view of life. Sometimes we are so focused on what is right in front of us we forget the big picture.”

A native of Mer Rouge, LA who traveled over much of the world complements of a military husband, Brenda gained knowledge that is reflected in her wide range of interest and subjects. Besides independent studies, private lessons and attending several universities around the country she considers herself primarily a self-taught artist. Before deciding to paint full time she was a commercial artist employed in the advertising field where she received numerous local and national awards. Brenda has commissions of homes, portraits of people and pets, landscapes and still lifes hanging in private and corporate collections in the U.S.A., Europe, and The United Kingdom.

Brenda helped organize and open the Ouachita River Art Gallery, which is now the oldest, and possibly largest, co-op art gallery in the state. The gallery is open to the public free of charge Tuesday through Saturday from 10 AM to 5 PM. A large and varied membership offers paintings in all media, jewelry, photos, wood works and pottery. Purchases of original art are tax free.

Holiday Variety is the theme at The River Gallery during December. This artist-run gallery hosts 25 artists working in all media from paintings to woodturning, pottery, jewelry, glass art, and photography. In addition to the exquisite offerings of fine art, the gallery will be featuring gift items for December. This includes smaller art, handcrafted wine stoppers, jewelry, unique ornaments, and notecards. Sales of the original works are tax exempt under the Louisiana Cultural District, so visitors not only support local artists but also save sales taxes when shopping.
Ouachita River Art Gallery is the oldest and largest co-op gallery in the state. We are grateful to the local community for the continued support of the arts in our area. We are thankful to our Delta Style readers who voted our gallery “Best Art Gallery” in 2011 and 2014. The gallery is at 308 Trenton Street, West Monroe, Louisiana. It is open Tuesday through Saturday 10 a.m. to 5 p.m.  Admission is always free. Call 322-2380 for more information or visit www.ouachitariverartgallery.com.

In the current days of digital everything, are there any people out there who remember the joy of watching a black and white photo come up in the tray of a wet darkroom? Well, there is a local pharmacist/photographer/artist who says “I catch myself smiling when it happens.  It is a joy to behold!”

Emily Brodnax, is artist of the month of November at The River Gallery (Ouachita River Art Gallery), on Antique Alley, and her darkroom work is known all over the nation.  Through countless showings and contest wins, her gelatin silver photographs hang from coast to coast.  This particular exhibition has pictures from California to Mississippi, and even Alaska. During shoots in different locals, people will stop to ask about the medium format vintage camera that she carries.  While traveling is a wonderful blessing, some of our local attractions are equally as interesting and picturesque.  For example, a small but lovely waterfall in northeast Louisiana.

Emily invites you to drop by the gallery through the month of October. Ouachita River Art Gallery is the oldest and largest co-op gallery in the state. We are grateful to the local community for the continued support of the arts in our area. The gallery is at 308 Trenton Street, West Monroe, and is open Tuesday through Saturday 10 a.m. to 5 p.m.  Admission is always free. Call 322-2380 for more information or visitwww.ouachitariverartgallery.com. 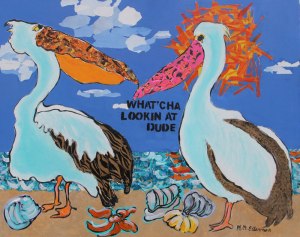 Margaret Ellerman, Featured Artist for August 2014, presents an exhibition of new works titled Between the Lines. A reception for the artist coincides with the Downtown Art Crawl, Thursday, August 7th, 5 – 9pm.

Mrs. Ellerman has degrees from Louisiana State University in Baton Rouge and Louisiana Tech; she is an art educator, teaching art classes at Franklin Parish High School. Her show, Between the Lines, is the culmination of a yearlong study of making hand decorated paper and artist altered commercial papers for use in sketchbooks and collage paintings and working with “continuous line drawing.”

“I worked with my students this past year at Franklin Parish High School making handmade stamps and mixed media sketchbooks. Multimedia, altered books, collaged sketchbooks, journals and papers have interested me for quite a while, and with a little preparation work students produced amazingly beautiful papers to use in their sketchbooks. Their results inspired me to construct my own “stamps” and use them to make decorated papers for collage for my show.”

The name collage is coined from a French word that means “to glue,” and is actually an art form that can be traced back hundreds of years but in the 20thcentury reappeared in the works of Picasso and Braque. John Lennon’s drawings that recently sold at Sotheby’s in New York, although not collage, were based on continuous line drawing – gesture and contour.” This type drawing usually injects humor in the pieces.

“In looking for a way to utilize contour and gesture drawing to portray humor in my work, I hit upon the idea of using my drawings, paint, decorated papers, glue, and words in mixed media paintings.”

Mrs. Ellerman has taught high school art classes and painting workshops for high school students, children and adults for many years. Her work has been accepted and has won many awards in national and regional art competitions.

The show will open at the next gallery crawl, August 7, 5:00 until 9:00PM, and will hang at The River Gallery, 308 Trenton Street in West Monroe through the month of August.

Ouachita River Art Gallery is the oldest and largest co-op gallery in the state. We are grateful to the local community for the continued support of the arts in our area. The gallery is at 308 Trenton Street, West Monroe, and is open Tuesday through Saturday 10 a.m. to 5 p.m.  Admission is always free. Call 322-2380 for more information or visit www.ouachitariverartgallery.com.

For the month of May 2014, the River Gallery features A Bit of Gumbo, a small works show by members of the River Gallery. Beyond its regular hours (Tues – Sat, 10am-5pm), the River Gallery will be open Sunday, May 4th, 1-5 pm, in conjunction with the Antique Alley Open House. Come shop, visit with us, and purchase wonderful art! 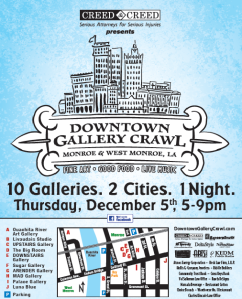 The River Gallery celebrates its 25th year in July!

the River Gallery
Blog at WordPress.com.